With the New Year firmly behind us (how did that happen so fast?), I've spent a lot of time reflecting during the last few months on what an awesome year I had in 2012.  I can't even really describe to you how different my life is sitting here today typing this from my life one year ago.  Don't get me wrong, I was happy a year ago.  I was in a good job, I'd come to some realizations about myself and what it was I was looking to get out of life.  I felt like it was the first time in my adult life that I knew who I was, as a part of the human race, as a woman, as a Christian, as a member of my family, and all the elements that made me unique in all those various roles.  I wasn't conforming or doing things because someone else wanted me to or because of how someone else might perceive me.  I was doing things that I wanted to do or avoiding things that had no interest to me.  I could physically see a change in the person I was.  I noticed it in pictures.  Not only was I losing weight, I was gaining confidence.  I wouldn't recognize myself in pictures right away, not because I was slimmer, but because my face looked different.  It looked lighter, more full of life, more confident... happier.  I'd look at my face and think 'Who is that person?  Is that me?  Wow... I look different.'  No one but me probably noticed that, but knowing the darker, less happy, more melancholy, less confident version of myself that I had been previously, I knew I'd come a long way, baby.

A few months ago, a friend of mine reminded me of this transition.  We'd each come to a pivotal point in our lives where we could continue moving in the direction that we'd become accustomed to.  We could sit back and just let life hand us our cards and play them reservedly and quietly, or we could grab the deck and pick out the cards we wanted and run full steam ahead.  We met for dinner one night after work after having had a few chat sessions about knowing we'd come to this crossroads at the same time in our lives.  As we sat there encouraging each other to go forward, to grab life, to make of it what we wanted, to know that we deserved the happiness that we each craved, I think something shifted in both of our minds.  We each knew that sitting still wasn't going to help us accomplish any of these dreams.  Although some people we knew in the past may have been fortunate enough that wonderful things just happened to fall in their laps, that obviously wasn't going to be the case for either of us.  We'd have to put ourselves out there, go outside of our comfort zones, take chances, and proactively go after those things we wanted so much in life.  We had to be confident in our ability to accomplish these goals and not sell ourselves short.  We had to set standards for people in our lives and not allow them to drain the life and spirit out of us because they happened to fulfill a short-term goal.  We needed to think and plan for the long-term if we wanted things to last for the long haul.

In short, we both decided we were going to be happy.  Come hell or high water.  At that moment.

Friends, it is a conversation I will not soon forget because it is literally for me, and I know too for my friend, one of those life moments after which everything shifted.  Although I had a good job, there were elements missing.  Within a few months of this conversation, I landed a position at a world-renowned university, rubbing elbows on a daily basis with people considered experts in my field.  My friend was able to move into a full-time role at her current employer and could finally transition out of having to work two jobs to make ends meet.  And most importantly, again within a few months of this conversation and also within weeks of each other, both my friend and I met significant others who have changed our lives.

Now don't get me wrong.  This decision, at least for me, was not a spur-of-the-moment endeavor.  There was a long transition leading up to my ability to make that decision.  I had to be in the right place in my head and my heart to make it and stick to it.  I had to be confident that I could be successful at it and willing to wait it out with no expectations of time frames or deadlines for completion or dates at which I'd throw in the towel.  I'd do what I needed to do for as long as I needed to do it to be happy.  And in that moment, it all came together.

And friends, today, a little over one year later, I am happy.  Plain and simple.

And I am engaged to be married.

In honor of "The Year of Us," as my friend and I coined it, she recently shared a picture with me that she saw on PostSecret.  Don't know about PostSecret?  Please... you must check it out.  (Not completely appropriate for all age groups, though, so beware.)  This picture and its sentiment put beautifully into words what we had experienced together during that pivotal conversation a year ago: 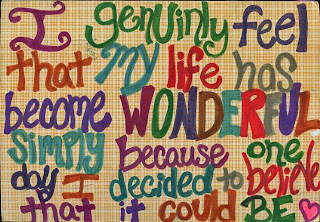 I am fortunate and thankful because that "one day" already happened for me. I hope that it has for you, too or that you're one of those lucky few who has everything fall into place naturally.  If you're neither of these things, believe that you can be.  Believe that you deserve it.  And find a friend who believes it too.

Author's Note:  Thank you, Anna, for our friendship and a year of encouragement and celebrations. 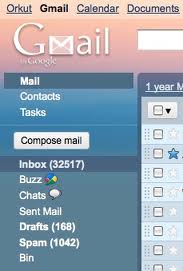 So, my Gmail account is a beast.  I've been using it since time began and have peppered the landscape with my email address.  From coupons to e-newsletters to fantasy football updates, I get barraged, like the rest of world, with messages that I will probably never read and will sit in my inbox taking up space until I delete them months from now.  A few years ago, I decided that it was high time I utilized some filters and created folders to automatically sort my emails as they arrived.  Like electronic postal elves.  I created one for e-newsletters thinking that someday in the distant future, I'd have time to sit down and catch up, learning all about the exciting happenings of various internet entities.

Yesterday, I noticed that my e-newsletters folder was rather large, home to over 2,000 emails.  For some reason, my Type A personality immediately creates a sense of panic in me when an inbox is at a seemingly insurmountable number.  Maybe I'm a bit OCD about it, but either I have to read them all or delete them all and start fresh.  Having this ridiculous figure looming over my head was daunting.  I opened the folder.

At the top of the list, and for reasons unknown to me, sat a shiny new e-newsletter from none other than my dear friends at eHarmony.  Now, keep in mind, Singletons and Marrieds, not only have I been off the market now for almost nine months, I have not had a eHarmony account in at least a year and a half.  Probably more than that.  I'm too lazy to look back through my previous posts to find out, but let's just say it's been a long time. Lest you forgot in that time gap, eHarmony is one of the most expensive online dating services on the planet (sometimes charging around $60 a month).  This girl lived by the mantra that her frugality outweighed her need for companionship, especially since most of the time I wasn't getting enough free dinners dates to justify the monthly subscription.  So, why am I still on their distribution list?  Well, knowing what I know about e-marketing, I probably missed a teeny, tiny, little check box when I cancelled my subscription all those years ago, and eHarmony has been patiently waiting in the shadows to strike at the heart of my implied loneliness with some awesome discounted rate.

So, why are we talking about this e-newsletter?  The title captured me.  Again, based on my e-marketing knowledge and experience, I know that the subject line is critical.  If you don't grab the reader in that little box with something appealing, you are doomed to the delete button.  So, when eHarmony opened our dialog with "The Top Eight Reasons Men Fall Out of Love," something happened in my brain.  'You need to know this, Melanie,' it said.  I nodded as if hypnotized.  I do need to know this.  So, open it, I did.  I followed the link to the online article (someone in their marketing department giggled as their click through rate went up, I know it) and convinced myself that eHarmony was a valuable source of knowledge for my relative dating inexperience.  I needed to safeguard my relationship from potential pitfalls, and eHarmony was the only place that could help.  Save me, Neil Clark Warren, you're my only hope.

After reading the article, and scouring every word for relevance, (and questioning some of their photo choices), I have decided that eHarmony is evil.  Evil, evil, evil.  Okay, maybe not the entire website (I know several of my readers have found the love of their lives via eHarmony).  So, let's say their writers are evil.  Everything they listed in their article were "duh" pointers.  If you're in a relationship and you don't know that your man will feel unloved if he doesn't feel like you support him or that he'll change the way he looks at you if you always meet him at the door with negativity, then you shouldn't be in a relationship.  These monumental insights were joined by other top secret information such as women who are high maintenance, couples who are incompatible, relationships that started on a one-night-stand and haven't connected beyond the bedroom, women who don't admire their men, ladies who are all business (bills, bills, bills), and moms who never cross back into wife territory all contributing as factors to why men fall out of love.  According to eHarmony writers. 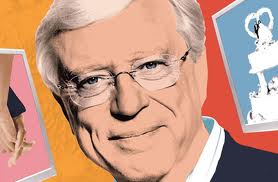 Maybe this article would be helpful if you were say, sixteen years old and had just entered the dating world... and had been raised by a pack of wolves.  I am convinced that eHarmony somehow wants to inspire a sense of doom in people.  Although I haven't quite figured out how they know which ones of us are currently in relationships and don't need their "services," I'm sure they have their wicked ways.  Once they have their victims in sight, they strike like a cobra, hoping you'll question things at home and maybe, just maybe, need them and their $60 membership fee and 425-question (not exaggerating) questionnaire (that you can't retake ever again even if you hypothetically initially filled it out ten years ago while slightly intoxicated at a college party, asking your friends for help with the answers).

Not happening, Dr. Warren.  You can keep your questionnaire and your levels of compatibility.  Stop emailing me.  I'm out.  Better yet, keep 'em coming.  They make great blog material.
Posted by Melanie at 12:27 PM No comments:

About this (ex-) Singleton

Melanie
Having just fallen off the edge of the cliff into my third decade on this planet, I'm a fun-loving down-to-earth girl who can get amazingly carried away by her own imagination.

Are You a Singleton?

Catch up on all the shenanigans!

The Men of Singledom

What other Singletons read this week...